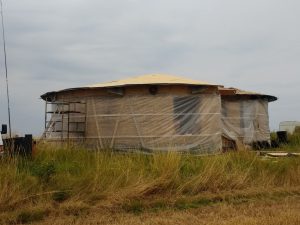 This is an adventure!! A house on the edge of the cliff at Skipsea, East Yorkshire. Barb & Rae of Straw Works & SNaB couldn’t resist the offer of buying the plot, with planning permission for a 3 bed, single storey house, even though it will fall into the sea in about 10 years. It was designed by Saffron Waghorn, but needed a lot of technical changes, which Barbara did with Simone Rushmeir (a graduate from SNAB) to make it actually buildable. It is a loadbearing building, two semi-circles joined by a square, so not the easiest of designs! However, they are building it using their own labour and recycled materials, hopefully for less than £15,000. It’s being built in stages beginning in 2011 with the car tyre foundations – these were done for less than £500, and several courses with SNaB led by Barbara on carpentry and strawbale building. It is not yet complete, but is getting closer. The roof was built on top of the foundations and then lifted up by crane – that went really easily – and now they are working on the roof covering, doors and windows. Watch this space!