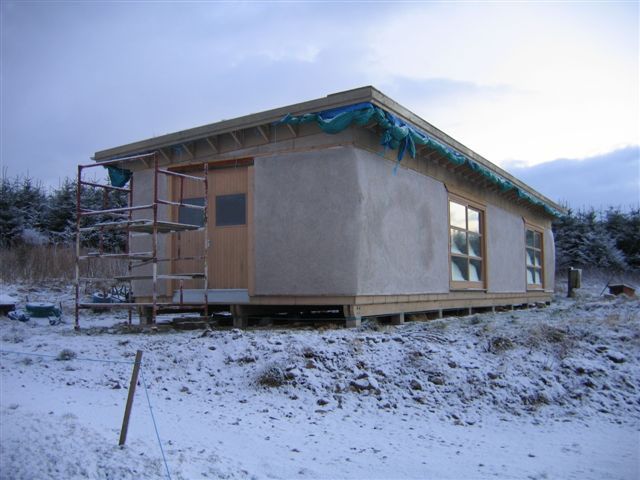 Sunnyside Croft is a 75m2 single storey, loadbearing artist’s studio designed by Anna X based on designs by specialist strawbale consultant Barbara Jones of Amazon Nails. It is cement-free and built in 2003 by self builders and courses run by Barbara Jones & Bee Rowan of Amazon Nails. Some contractor help was used for the roof and further plastering. It is a simple rectangular design with a mono-pitch roof. Foundations are simply timber posts standing on large stones – top soil was removed and the studio sits directly on the good bearing subsoil. It is one of the first strawbale buildings in Scotland, plastered with a hotlime mix. The bales were re-baled from large round bales sourced from a local poultry farm. This proved to be a problem later as some of the straw disintegrated – tests showed this was due to over fertilisation during the growing period as the farmer disposed of the poultry waste on his land instead of elsewhere. It is not recommended to use straw from a poultry farmer!