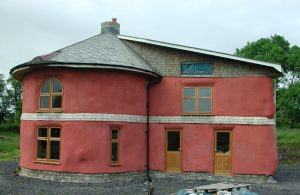 A truly amazing design based on sacred geometry by the owner Norita Clesham who worked on the Clones house. It has the proportions of an abalone shell and was quite difficult to set out with no electronic aids! The design for planning was drawn up by Michael Rice, and the technical drawings and details were by Barbara Jones. This was the first ever 2 storey loadbearing building of any description in Europe, built close to the west coast of Ireland, both things that were said not to be possible. Barbara worked closely with Norita over 4 years to help build this wonderfully inspiring house, working with over 100 volunteers (most of them women), running courses and working on it herself during the summers. Bee Rowan also worked on this house, which was a live building site between May and October the first 2 years and closed up during the winters. Barbara enjoyed the challenge of building the spiral shaped roof using I joists and cutting each individual wedge for the 55 rafters by hand. It has cedar shingles with sheepswool insulation. Lime and clay plastering was done via courses run by Barbara and also by George O’Malley. Begun in 2001, it was finished in 2004 and cost only €70,000