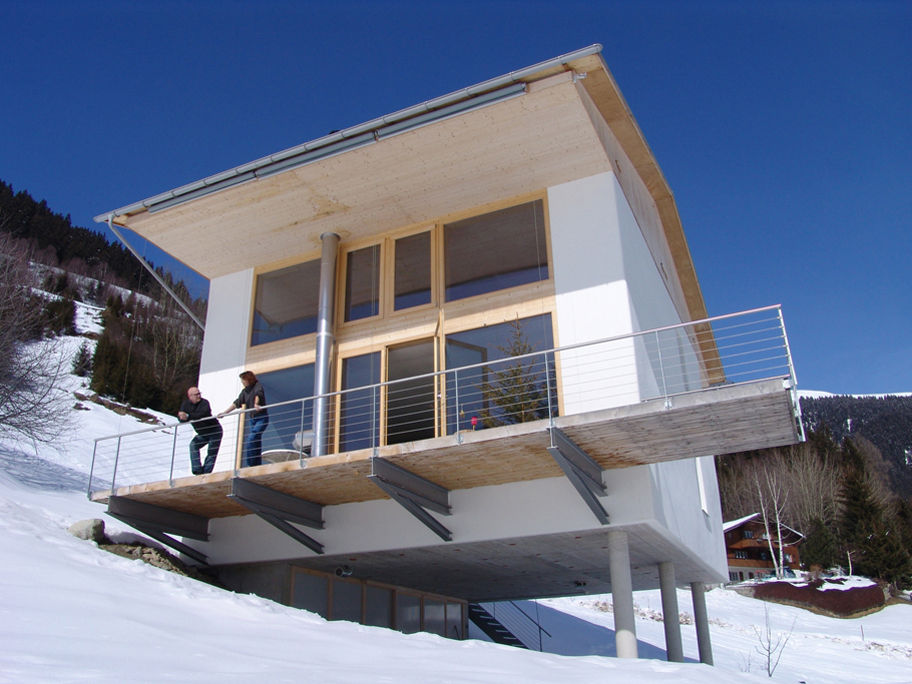 The building sits on a reinforced concrete floor slab, which is supported on the slope side by a strip foundation and on the valley side by columns with point foundations.
The wall construction is made with so-called jumbo straw bales with the dimensions 2.40 m long, 1.25 m wide and 0.70 m high, weighing 320 kg.
The wall thicknesses of 1.25 m are necessary to carry the snow load, which in the region is 620 kg/m2. With a roof area of 150 m2, that’s over 100 tonnes! At the same time, the thick walls serve as excellent insulation material.
The straw bales, layered in a bond, are braced to the floor slab with plastic straps. A ring beam made of three-layer boards forms the upper end of the walls.
Under constant re-tensioning of the plastic straps, the overall construction settles by a considerable 30 cm. A difference that was taken into account by the architect in the window and door heights. After four weeks, the house has finally settled. The tension straps stabilise the straw walls and prevent expansion. The exterior and interior are then plastered with a lime-cement plaster. The plaster penetrates up to 8 cm into the straw and, together with the straw, forms a static unit that also absorbs the horizontal forces of the construction.

Herbert is author of the book "Neues Bauen mit Stroh in Europa" (New Building with Straw in Europe), head of the austrian strawbale network ASBN and partner in the Leonardo-project "STEP" (Strawbale Training for European Professionals) and the Erasmus project "BuildStraw Pro" (a project to get formal national recognition of the training) and "Make your City Smart". As a collector he documents European straw bale buildings since 1999 on his website (database, german), in lectures, workshops and books.