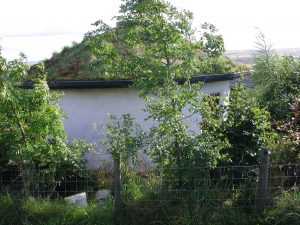 This was designed as an amenity building for a barn type hostel at Latham Farm, by a young Architect from Switzerland, Simone Comandini, who met the owner and with his girlfriend was helping out around the farm in 1999. Barbara Jones gave consultancy advice and changed the original design from a timber frame to loadbearing for simplicity and to save on cost. As it was loadbearing, we were able to decide where to put the window based on the best view! It houses a compost toilet, shower and changing room. Close to the Calderdale Way, it is regularly seen by walkers. Barbara ran courses to build the walls and begin the lime plastering – the rest of the building was self-built, although Barbara helped with the roof. The plaster was applied before the roof weight had settled the walls, as the Architect wanted to see it on before he returned home – this resulted in some cracking, that was left over winter resulting in some damage to the straw. This was later repaired and then a greenhouse was built onto the front. It’s one of the earliest examples of modern cement-free foundations, using reclaimed local stone with lime mortar – just like the barn next door!