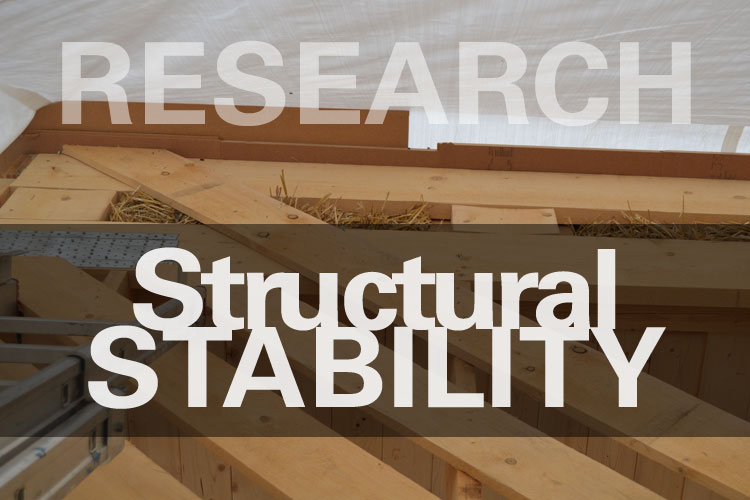 Straw Bale Building is said to be a promising way of building both under ecological and economical aspects. But its spread in Germany is slowed down by a lack of knowledge. This PhD thesis wants to make a contribution in speeding up the spreading of Straw Bale Building by increasing the knowledge about it.

Within the framework of this thesis the characteristics of the hydroscopic sorption of different sorts of straw were tested. Based on those tests equations to specify the equilibrium moisture content according to the BET-theory were set.

The use of straw bales containing highly damaged straw fibers should be avoided respectively only used in non load bearing constructions. Combine harvesters with an axial threshing machine should not be used in threshing straw for straw bale buildings because of its negative influence on the straw fibers. Field tests have shown that ordinary two string balers can produce straw bales of sufficient quality for straw bale building by optimizing the baling conditions. However, improvements are desirable. Jumbo Bales can be produced in much higher quality. But the use of these bales
is limited by its size. It seems to be worth to improve the straw bale saw developed in this thesis to enable it to cut Jumbo Bales, too, in order to increase the range of use of Jumbo Bales.

The elastomechanical performance of straw bales and straw bale walls were examined in more than 200 tests. The author found out that bales on edge are more suitable in load bearing constructions than bales on edge under the certain condition that lateral margins and horizontal inlays are used to stabilize the constructions against horizontal buckling. It is recommended to load straw bale walls to a maximum stress of 20 kN/m². If you want to avoid creeping within the lifetime of the straw bale building, walls made of bales on edge must be precompressed down to 92%, walls made of bales lying flat down to 86% of the original height under the described conditions. Should creeping be allowed, ultimate creeping of 1.8% (bales on edge) resp. 3.1% (bales on flat) must be calculated under the conditions mentioned.

Little load bearing buildings with green roofscan even be constructed by two string bales on edge. If Jumbo Bales and light roofs are used, two and even three story houses are theoretically possible. Load bearing vaults made of straw bales could be a promising option to realize wide spanning structures in the future.

Looking at the amount of work involved to build straw bale structures, non load bearing constructions filled with bales on top with outside wooden cladding could be considered as best.

Dissertation for obtaining the academic degree of a
Doctor of Engineering (Dr.-Ing.) f the Department of Architecture
The University of Kassel